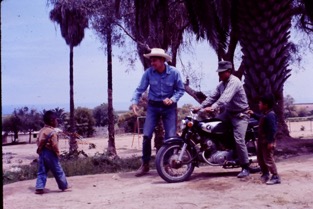 I would spend my extra time in the afternoons with Juan, the SIPA veterinary technician, playing games with local children; tag and hide-and-seek were always fun games for the children. Juan was always on his 125 cc Honda.

“What would you do with your extra time? Play? Chat? Is that all you did? What about helping the children? Can you elaborate a little more?” It was a valid question from the future, 42 years in the future.

“I wish I could say that I did more to help the children of Ite. I know playing and chatting doesn’t sound like much in today’s world.”

“You see Sir, back then in 1968, John F. Kennedy envisioned young Americans helping communities around the world, setting an example of good will, and learning that people could live together if only they could see and talk each other. Just being there, playing and chatting with the children of Ite was a giant leap forward for the world community. Just being there helped erase the image of “The Ugly American” for thousands of young people in hundreds of countries around the world. Just being there was an achievement equal to the landing of men on the moon in 1969. Landing a volunteer in Ite, Peru, and thousands of other world communities, in 1969, was a “giant leap forward for mankind.”

I suddenly realize that maybe people in 2010 do not really understand this achievement of the Peace Corps and the Peruvian Ministry of Agriculture back in 1968.

“Just being there.” That was the mission.