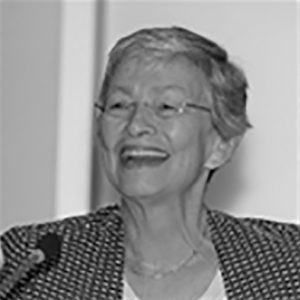 Ms Carol Bellamy has recently completed her mandate as the Chair of the Governing Board of the Global Community Engagement and Resilience Fund (GCERF). Ms Bellamy was previously a member of the New York State Senate, President of the New York City Council, Director of the United States Peace Corps, Executive Director of the United Nations Children’s Fund (UNICEF), and Chair of the Board of Directors of the Global Partnership for Education. Ms Bellamy has worked in the private sector at Morgan Stanley and Cravath, Swaine & Moore. She is also an emeritus member of the American University of Beirut Board of Trustees and is a former Fellow of the Harvard Institute of Politics. She has been awarded the Légion d’Honneur by the Government of France, and the Order of the Rising Sun in Japan.