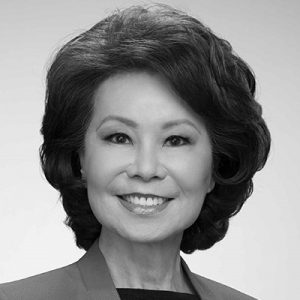 She came to America at age 8 not speaking English and received her citizenship at 19.   Her experience transitioning to a new country motivated her to ensure that everyone can access greater opportunities.

Prior to being Secretary of Labor, Secretary Chao was President and CEO of United Way of America where she restored public trust after it was tarnished by scandal.  While she was Director, Peace Corps launched the first programs in the Baltic states and the former Soviet Union.  Secretary Chao had served as a White House Fellow; Deputy Maritime Administrator; Chair, Federal Maritime Commission; and Deputy Secretary of the U.S. Department of Transportation.   The eldest of six daughters, she graduated from Harvard Business School and holds 37 honorary degrees.