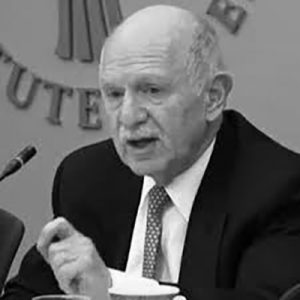 Mark L. Schneider served as director of the Peace Corps from 1999 to 2001 and as assistant administrator of the U.S. Agency for International Development for Latin America and the Caribbean from 1993 to 1999.  He currently is a senior adviser with the Americas Program and the Human Rights Initiative at the Center for Strategic and International Studies. He also is an adjunct professor at American University’s School of International Service.

He has had a public service career spanning government, international organizations, civil society, and academia. He served as senior vice president and senior adviser of the International Crisis Group (ICG) from 2001 until March 2017. With ICG, he traveled multiple times to Afghanistan and Pakistan; Nigeria, Guinea, and Liberia; Kenya, Somaliland, and Ethiopia; the Balkans; Colombia, Bolivia, Ecuador, Mexico, Guatemala, El Salvador, and Haiti. He has testified frequently before Congress on conflict issues.

Prior to re-entering government in 1993, he was chief of the Office of Analysis and Strategic Planning at the Pan American Health Organization/World Health Organization. He was principal deputy assistant secretary of state for human rights and humanitarian affairs from 1977 to 1979 and a foreign policy adviser to Senator Edward M. Kennedy (D-MA) from 1970 to 1976. Schneider received his B.A. in journalism from the University of California at Berkeley, his M.A. in political science from San Jose State University, and an honorary doctor of laws degree from American University.

He received the Bernardo O’Higgins Medal for human rights work from the government of Chile in 1993; the Gran Cruz, Orden al Mérito, from the government of Chile in 2000; and the George W. Eastman Medal for Public Service from the University of Rochester in 2000. He has lectured at various universities; had articles and essays published in academic journals, newspapers, and magazines; and appeared on CNN, NBC, ABC, CBS, NPR, and numerous other radio and television networks. He was a member of the Board of Trustees of American University for 10 years.