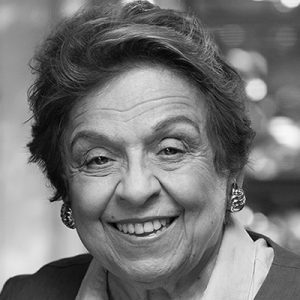 Donna E. Shalala has more than four decades of experience as an accomplished scholar, teacher, and administrator.

In 1993, President Bill Clinton appointed her U.S. Secretary of Health and Human Services (HHS) where she served for eight years, becoming the longest serving HHS Secretary in U.S. history At the end of her tenure, a Washington Post article described her as “one of the most successful government managers of modern times.”

She served in the Carter administration from 1977 to 1980 as Assistant Secretary for Policy Development and Research at the U.S. Department of Housing and Urban Development.

In 2007, President George W. Bush handpicked Shalala to co-chair with Senator Bob Dole the Commission on Care for Returning Wounded Warriors, to evaluate how wounded service members transition from active duty to civilian society. In 2009 she was appointed chair of the Committee on the Future of Nursing at the Institute of Medicine of the National Academy of Sciences.

Dr. Shalala has more than four dozen honorary degrees and a host of other honors, including the 1992 National Public Service Award and the 1994 Glamour magazine Woman of the Year Award. In 1992 BusinessWeek named her one of the top five managers in higher education and U.S. News & World Report named her one of “America’s Best Leaders” in 2005. In 2008 the Council on Excellence in Government named her one the greatest public servants of the past 25 years. In 2008 President Bush presented her with the Presidential Medal of Freedom, the nation’s highest civilian award, and in 2010 she received the Nelson Mandela Award for Health and Human Rights, which recognizes individuals for outstanding dedication to improving the health and life chances of disadvantaged populations in South Africa and internationally.

In 2011 she was inducted into the National Women’s Hall of Fame in Seneca Falls, New York, and in 2014 she was recognized by the Harry S. Truman Library with the Harry S. Truman Legacy of Leadership Award and received the Greater Miami Chamber of Commerce’s highest honor, the Sand in My Shoes Award, for her significant contributions to the Miami community.