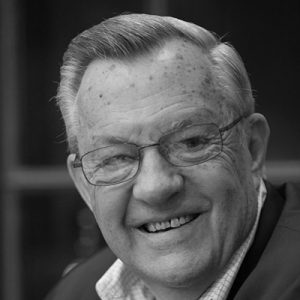 Ron Tschetter is the former director of the United States Peace Corps, having served under President George W. Bush from 2006-2008. He was the third director in Peace Corps history to also hold the distinction of being a former Peace Corps volunteer. He credits his 2-year service working on community health planning in India with his wife Nancy in 1966 with changing his perspective and outlook on life—permanently.

Ron was confirmed as director of the Peace Corps in 2006. Under his leadership, the Peace Corps launched their “50-plus initiative.” This program aims to increase the participation of volunteers aged 50 and up. Ron believes that this segment of the population has wisdom and experience to bring to their volunteer efforts, as well as a passion to serve. The Peace Corps experienced a 30-year high in volunteer numbers during Ron’s time as director.

Ron earned a bachelor degree in psychology and social studies from Bethel University in St. Paul, MN. Retaining his ties to the Peace Corps after his volunteer service, he had previously served on the National Peace Corps Association Board (an organization representing former volunteers) from 1993-1999. After his volunteer service in India, Ron began his career in 1970 as a retail and institutional investment executive. He worked in management with Dain Rauscher, a full-service investment firm based in the Northwest, for 28 years before retiring as president of Private Client Group in 2001.

Ron and his wife, Nancy, have two sons and eight grandchildren, with another on the way. Today, he lives in Rapid City, South Dakota. He includes hunting, fishing and woodworking, and of course travel, among his hobbies.